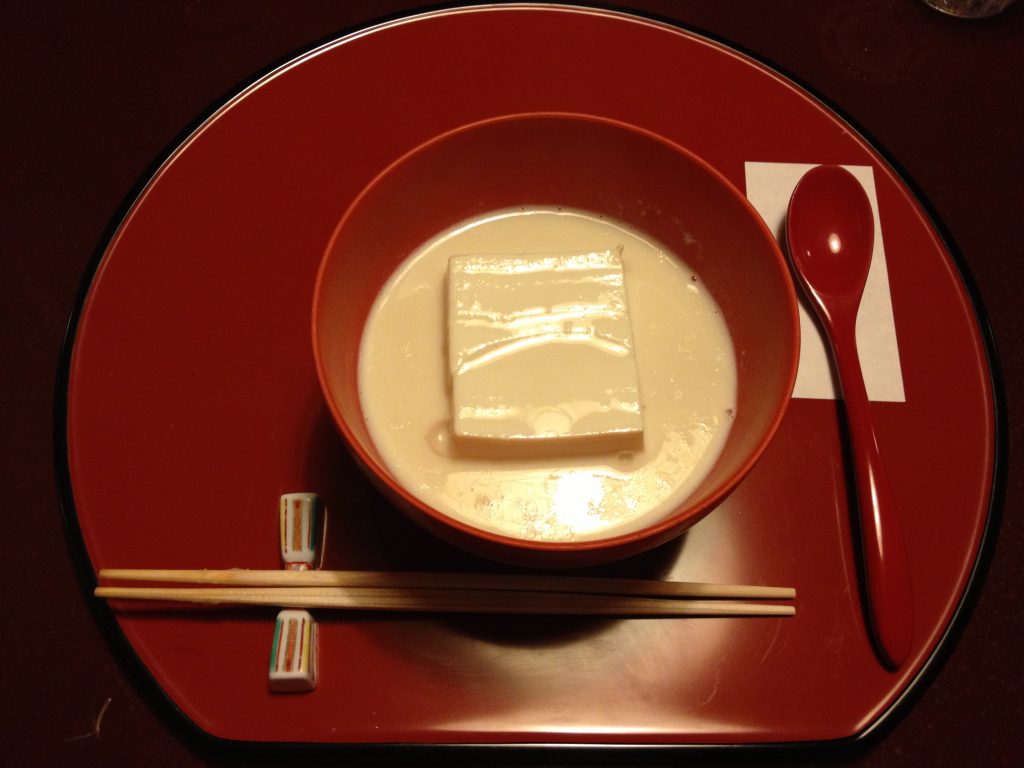 Something that can’t be replicated by a “fake” Japanese restaurant in the US: Homemade Tofu served as part of a multi-course feast at Ukai, a lovely traditional Tokyo tofu restaurant.

I’m still pondering the process of cultural assimilation, and how I get so frustrated when Japanese culture – especially Japanese food culture – gets appropriated by people who don’t really appreciate the culture.

I calmed down some when a friend reminded me that rock and roll music began as an appropriated form of various strains of black music being played by white musicians. Then, the culture evolved and a new, hybrid form of rock music came of age. The Beatles were rooted in American styles like soul, R&B, folk, country and of course pop music, but they created a new sound that was their own, and embraced by the boomer generation.

I accept that assimilation happens and wrote previously about how I can’t stop the process of cultural evolution. Musical mashups and fusion food are both aspects of modern life.

Going back to the music world as a reference, early hip-hop appropriating Kraftwerk’s nerdy ‘70s techno-rock was great as far as I’m concerned. Rap pioneer Afrika Bambaataa once said that Kraftwerk’s “Trans-Europe Express” was one sample he couldn’t cut up, and he used it reverently.

And going back to food, let’s face it, 99% of “Chinese food” in America isn’t familiar in China at all.

The dishes we know and love may be based on authentic Chinese cuisine but they’re made today for American palates. There’s no such thing as “Beef with Broccoli” or “General Tso’s Chicken” in China. And the fortune cookie is a foreign object there too – the idea of a thin cookie folded with a message inside is a Japanese invention. Don’t believe me? Read former NYT reporter Jennifer 8 Lee’s excellent “Fortune Cookie Chronicles,” a history of Chinese food in America.

So I love finding the “real” Chinese restaurants, or the joint that serve a separate “Chinese menu” for diners in the know. But you know what? I also still love going to Tea Garden, a neighborhood family restaurant that serves Sesame Beef, Orange Chicken and Chow Mein – all American Chinese creations.

So is that appropriation? Or something else?

I realized that there’s another step to my Appropriation/Appreciation worldview: Accommodation. It’s part practicality, part the inevitable product of assimilation, which let’s face it, is the story of immigration. There are lots of examples in Asian food in America.

First and most obvious, many if not most Asian restaurants in the US serve food for American diners, not other Asians. That’s why at a Thai restaurant, if you’re not easily identifiable as being Southeast Asian, the server asks, “how spicy?” I ask for “family spicy,” like how hot they make the dish for themselves in the back. And sometimes I regret it, as I gulp down glass after glass of water to cool down my burned-out mouth.

Almost every Thai or Korean restaurant I go to also makes their food noticeably sweet. Do you like the cloyingly sugary potato salad that’s served as a side dish (“banchan”) at Korean barbecue restaurants? It didn’t start out that sweet. They do that for their non-Korean diners who prefer it cavity-inducing. Same for over-sweetened peanut Satay dishes or some of the curries in Thai restaurants. It’s extra sweet for American tastes.

These tweaks to traditional Asian cuisine don’t offend me like they would if the rest of the dishes were phony, or if the food were served in a fake-Asian themed fast-casual chain, which I see more and more often. That’s appropriation. That’s Pat Boone singing a wimped-out, watered-down, white-ified version of Little Richard’s “Tutti-Frutti” for an unadventurous audience that’s not ready for the real thing.

The evolution of American Chinese food and sweeter-than-necessary Korean and Thai food isn’t appropriation, but more a fact of accommodation. These adaptations were necessary for the community’s business survival over the decades.

This accommodation doesn’t bother me as much as lousy ramen or fake sushi being foisted on uneducated diners. These Asian restaurants are giving the people what they want, while still sticking to their bona-fides.

Appropriation, appreciation and accommodation in food culture came up the other day with one of the college students I work with for the student-run news website forbthe University of Colorado (I’m the staff adviser). He’s an adventurous world traveler who wants to be a journalist, who has a love for South Asian culture and cuisine (all of it – for those who may not realize, India alone is a country of hundreds of languages, heritages and culinary cultures).

Some other student had bought a package of a snack called “Saffron Road Crunchy Chickpeas Wasabi” and left the bag in the newsroom. Until the wasabi part, it sounds like a South Asian treat. The Japanese root herb wasabi makes it an ethnic fusion mashup, which made my cultural alarm go off.

I Googled the company and it was founded by a Muslim man who grew up with Halal food and manufactures a line of healthy snack foods with Asian ethnic roots. My student and I discussed the limits of making cultural assumptions, and I had to admit I was being too much of a hard-ass when I assumed the worst of this bag of (pretty damned delicious) snacks.

I confessed that I had Saffron Road pegged wrong. It wasn’t an appropriation of South Asian or Japanese culture. It was a blended accommodation of two cuisines to come up with a new hybrid.

And, it passed the most important test of all: It was delicious. It rocked.

Anyone who is an immigrant, or whose family came to the US from another country, understands the process of Assimilation. Yes, I still watch out for cultural appropriation and hate fake Japanese cuisine, but I also now understand that our food can travel the same journey as our community has, and become a blended, assimilated American.