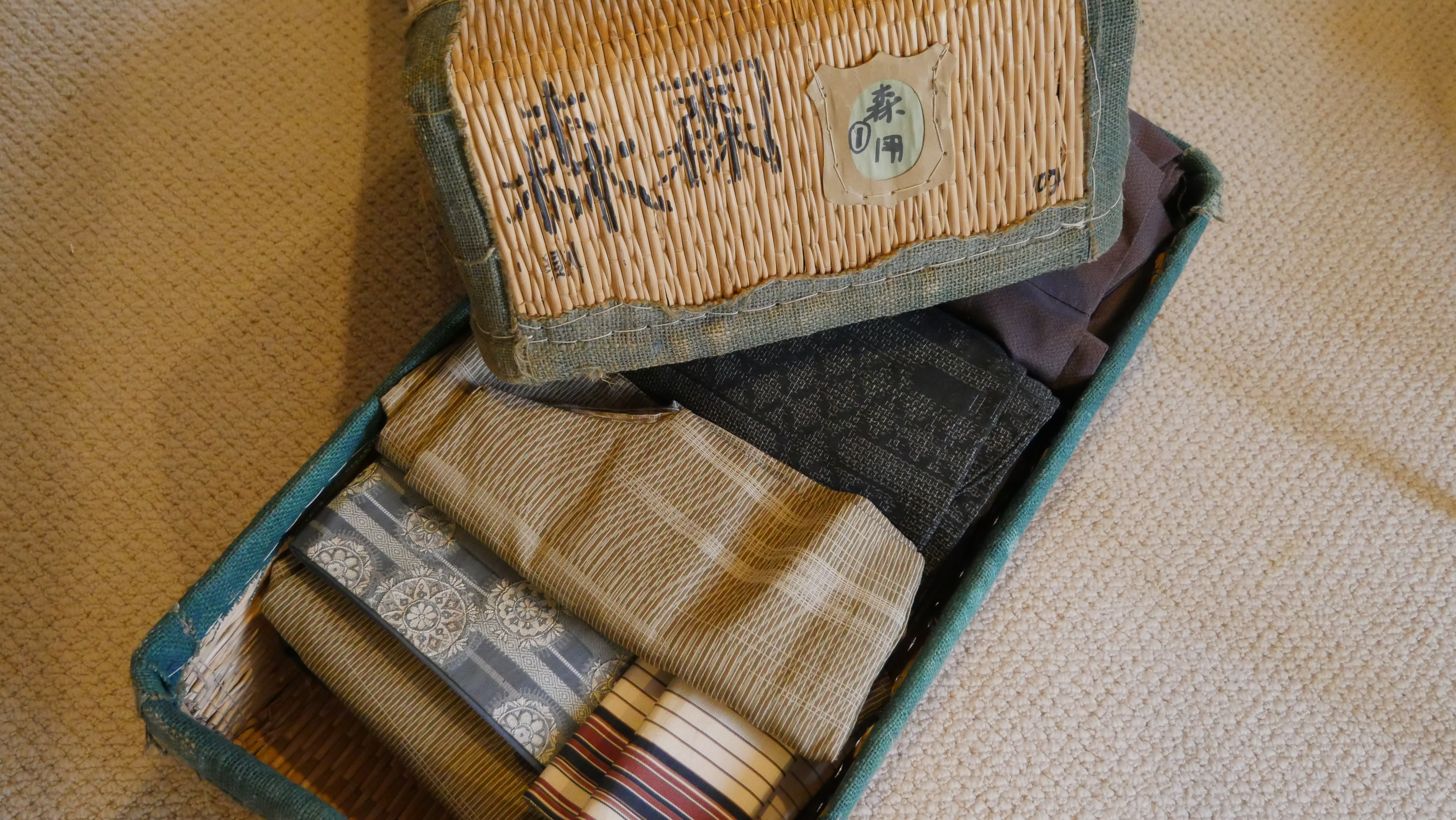 10 Jul Kimono no mono: Some thoughts on kimono

Like a lot of people, when Kim Kardashian, who is famous only because she (and everyone in her family) is a celebrity, named her new line of body-shaping underwear “Kimono,” I was appalled. I thought the headline was a joke – you know, “fake news.”

The choice of name was dumb, because – duh – kimono are a traditional Japanese outer garment and have nothing to do with underwear. But there was some logic in calling her line of undies that, although I doubt she knew this when she settled on the brand name: “mono” means “thing” in Japanese so calling a Kim Kardashian product “Kim-mono” sorta makes sense as “Kim’s thing.”

Still, it was a stupid move, and especially when she filed trademarks so nobody else could use “kimono.” I’d like to have seen her taking a Japanese shop to court for selling kimono, when the family that owns the shop has probably been making and selling kimono for hundreds of years. That’s the kind of respect for cultural tradition that Kardashian clearly lacks. To be fair, Kardashian’s family on her father’s side is Armenian, so she may be more attuned to that country’s culture, cradled next to Turkey between the Middle East and Eastern Europe, than Japanese.

The thing is, kimono as a word, idea and garment can’t be “owned” by a western company to represent a western product. It has a long and distinguished history as a garment for both men and women, and depending on the fabric and pattern, for all levels of society from poor farmers to rich samurai. The kimono first arrived from China (as many things in Japanese culture have) during the Tang Dynasty and Japan’s Heian Period (794-1192 CE). During the Edo period, when Japan was isolated from foreign influence and samurai culture and arts developed, the modern kimono with its long sleeves and formal wide obi belts evolved.

When I was growing up in Japan in the early ‘60s, it wasn’t unusual to see women — often older — in even big cities like Tokyo wearing kimono. Not fancy, colorful ones necessarily, but functional clothes for everyday shopping in muted colors. Today, if you see a kimono in public, it’s probably for a special occasion like a festival or traditional wedding, or a tourist who paid to wear one for a few hours and pretend to be geisha.

I have a yukata, a cotton summer kimono, that my wife’s grandmother gave me one year to wear during obon dances to honor my ancestors. And when my grandmother in Hokkaido passed away, my uncle shipped me her rattan trunk of her kimono and obi (see above). Again, they’re not fancy or colorful – she was a shopkeeper – but I treasure them.

Kimono have become such a part of the visual and cultural language of Japan that the city of Kyoto, itself one of the treasures of Japanese culture, announced this year that it’s submitting kimono for UNESCO’s list of “intangible cultural heritage.” Kyoto’s Mayor wrote a letter to Kardashian when the Kimono line was announced, which eloquently urged her to change her mind:

I am writing this letter to convey our thoughts on Kimono and ask you to re-consider your decision of using the name Kimono in your trademark.

Kimono is a traditional ethnic dress fostered in our rich nature and history with our predecessors’ tireless endeavours and studies, and it is a culture that has been cherished and passed down with care in our living. Also, it is a fruit of craftsmanship and truly symbolizes sense of beauty, spirits and values of Japanese.

In recent years, we see not only Japanese but also many foreign tourists wearing Kimono and strolling around in Kyoto and cities in Japan. It is a proof that Kimono, that we are proud of as our traditional culture, is loved by people from around the world.

We are currently undertaking initiatives nationally to make ‘Kimono Culture,’ symbol of our culture and spirits, registered to UNESCO’s Intangible Cultural Heritage list. We think that the names for “’Kimono’ are the asset shared with all humanity who love Kimono and its culture therefore they should not be monopolized.

I would like you to visit Kyoto, where many Japanese cultures including Kimono have been cherished, to experience the essence of Kimono Culture and understand our thoughts and our strong wish.

After a week of social media abuse and then this letter, Kardashian wisely announced she’ll choose a different name for her underwear line.

Some people, including a couple of social media acquaintances of mine, thought this was one of those tempest in a teapot fights over “political correctness” and shrugged off the controversy with a “who cares?”

I do and so do a lot of people, not just Japanese, either. This issue wasn’t only about wringing hands over political correctness. It was about a probably unintentional, and worse, unthinking act of cultural appropriation that would change the meaning of one of the most revered Japanese words, and one that’s known around the world for something other than tummy tuckers and curve flatteners.

I don’t think Kardashian is racist (Google what happened to Armenians), or even opportunistic. I didn’t imagine her wiggling her fingers together a la “The Simpsons’” Mr. Burns, plotting how she’s going to tear away the traditional kimono to show how Kim’s mono holds in a big butt.

I just think she was oblivious to any potential ripple effects and was genuinely surprised when the controversy hit the proverbial fan. In a Wall Street Journal interview, she said she had “innocent intentions” and admitted, “You would think we would have obviously thought it through a little bit deeper.”

The mono about kimono is that underwear is just the latest manifestation of the West’s fascination of what it considers to be “exotic” about the East.

Pop star Katy Perry displayed a more recent version of garish Orientalism on the 2013 American Music Awards, performing an opening number rife with an awful mashup of Japanese, Chinese and just plain eff-ed up cultural touch points, which included dancers bowing and clasping their hands together in faux Buddhist gassho (prayer) and dressed in gaudy kimono-esque costumes that had Mandarin collars, slits up the leg and low-cut necklines. Definitely not respectfully Japanese or Chinese or any-nese, except in the feverish fantasies of Westerners ever since the colonial era in Asia.

In a way, you can’t blame Perry after more than a century of Orientalist tropes piling up like sand on the beach. In 1998, Madonna’s video for “Nothing Really Matters” also featured the then-pop star in a kimono during a fad of Japanese fashion that swept through the country. Perry was 14 years old at the time, and probably revered Madonna and absorbed her appropriation.

Although more earnest and well-meaning, cosplay plays up creepy kimono memes too.

Anime fans who — god love ‘em — cloak themselves in cheap flowery bathrobes as a substitute for kimono to attend the annual Sakura Matsuri (Cherry Blossom Festival) or anime cons as cosplay tributes to Japanese culture end up cheapening the very culture they want to raise up. But like I said, god love ‘em, I’ve met some anime fans who’ve gone on to study Japanese in school and even live and work in Japan.

That’s when a low-level form of appropriation that’s consciously attempted – albeit bumblingly – can become appreciation at an honest and inspiring level.

And, let’s face it, anything that gets people, especially young people, to think about and dream about Japan and Japanese culture ain’t all that bad. Kim Kardashian might have avoided this kerfuffle over her underwear if she’d paid some attention to anime series that prominently feature real – er, cartoon – kimono.

UPDATE: A friend alerted me to a controversy from May in the sewing world over the misappropriation of the word “kimono,” and from that I came across this terrific piece on Densho (an important site that deserves your support) by guest blogger Emi Ito: “My Kimono Is Not Your Couture” from earlier this year. A must-read!

Here’s an interesting video from “Asian Boss” where everyday people on the streets of Japan (Tokyo, I assume) were asked what they think about Kardashian using “Kimono” to name her underwear line.