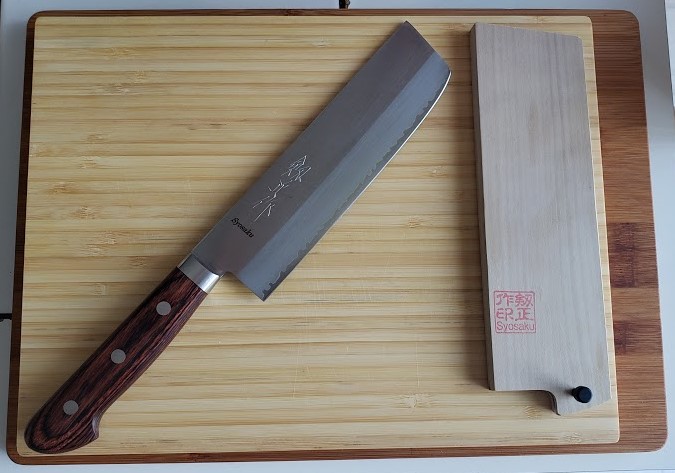 03 Jun Blade runner: The Nakiri is the Japanese knife you want for vegetables

And now I have a Nakiri knife to keep my Santoku company.

The Nakiri knife used to be the most common knife found in Japanese kitchens in the years before World War II, when the Japanese diet included more vegetables and less meat. In the post-war years, as tastes for Western food increased, general-use chef’s knives (Gyuto, a Japanese variation of traditional European chef’s knives and Santoku, a chef’s knife with a Japanese shape for slicing, dicing and mincing) became more popular and the Nakiri was less often the go-to knife.

Syosaku-Japan, the knife retailer, credits the healthier modern cuisines and rise of vegetarian diets and associated recipes with the revived interest in the Nakiri. Syosaku sent me a 6.3-inch Nakiri knife that came with a Magnolia wood saya, or sheath, to test and review.

I’m an affiliate for Syosaku-Japan, because I like every interaction I’ve had with the company, love the Santoku I bought, and also love the pricey but gorgeous glass-and-lacquer Urushi plate I bought for Erin. And, I’ve gotten to know the founder of the company, Toshi-san, over text and video conversations.

Like all the knives he sells, the Nakiri is hand-crafted in Sakai, a town outside of Osaka that’s renown for its family-run knife artisan shops. They’re not rolled off some assembly line; they’re painstakingly forged by generations of blacksmiths, hand-sharpened by experts, and finished with handles of wood and horn in either an ergonomic Japanese octagonal or “D” shape or a one that has a butt with a Western-style flourish that fits in the palm.

My older Santoku has a Japanese octagonal walnut handle; the Nakiri that Syosaku-Japan just sent me has a dark, curvy mahogany handle.

Like the Santoku, the Nakiri is sharp – deadly sharp! And because of the way the blade is forged, the edge will retain its sharpness for a long time, needing only occasional touching up with a whetstone to fine-tune it. Mind you, these blades aren’t indestructible. The Santoku can slice, dice and mice meat, fish or vegetables. The Nakiri is designed for all manner of vegetables, even tough stuff like the core of a cabbage.

Like the Santoku, the Nakiri has a very thin blade and is surprisingly light, especially if you’ve always used Western chef’s knives. And because they’re so sharp, you can be super precise with your cutting, and it won’t damage whatever you’re cutting. Anyone who’s tried to thin-slice a ripe tomato with a dull knife knows what that’s like. My Santoku and Nakiri, and my other knives when I sharpen them, cut clean through everything including ripe tomatoes, even if I want the slices paper-thin.

However, neither knife is designed to cut through bone or frozen foods. Syosaku-Japan and every other knifemaker warns you that right upfront.

There are other knives better suited to cutting through harder stuff. Although I wouldn’t use it on thick bone, I use an inexpensive Deba knife (I didn’t get it from Syosaku), which is heavier and single-beveled and designed primarily to fillet fish, to debone rotisserie chicken. It easily slices through the meat and cuts the small bones of the wings and thighs at the joints, and I never worry about damaging my finer blades. But for prepping all manner of vegetables, I’ll turn to the Nakiri from now on.

The Nakiri — the one I got is sold for a reasonable $155 and is being promoted as a Father’s Day gift — was delivered the day I made a Paleo Chicken and Napa Stir-Fry, with lots of carrots, ginger, onions, garlic and Shiitake mushrooms cooked in a sauce that used coconut aminos instead of shoyu. So I used the new knife to cut up all the veggies and the Santoku to cut the chicken into bite-sized pieces. It turned out pretty well, I think.

I’m happy with my two top quality Syosaku-Japan knives, plus my collection of older knives including my mom’s old Gyuto. And, of course, I’m eyeing some other knives for the future.

Next post coming soon: My review of the amazing Syosaku-Japan Urushi Charger Plate, a red one to complement the black one I bought in 2019!

(NOTE: As an affiliate of Syosaku-Japan, I’ll get a small percentage of whatever is sold through this link. But I’ve been featuring my Santoku knife which I bought from Syosaku-Japan as well as their beautiful Urushi glass plates in my foodporn social media posts for the past year and a half, and honestly love their products and the company’s attention to customer service.)