Posted at 12:46h in asian american by Gil Asakawa
Share 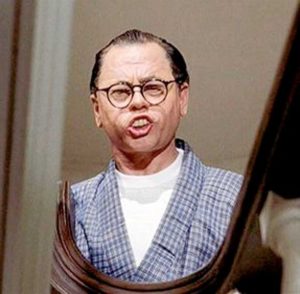 This week, The Gap began airing a pretty cool TV commercial that takes a Hepburn dance sequence from her 1957 musical co-starring Fred Astaire, “Funny Face,” and sets her moves to AC-DC’s “Back in Black.” The commercial is pushing the retailer’s new line of skinny black pants. Hepburn’s character, a Greenwich Village beatnik who becomes a Paris model, is wearing hip skinny black pants in the dance scene.

It’s a very hip ad, all right, not unlike ads in recent years that had John Wayne, Humphrey Bogart and even Astaire himself, computer-copied into modern settings.

I used to love Hepburn’s look in those classic films. I also truly appreciate the humanitarian work she did towards the end of her life. But because of one of her films, I have a hard time with her image.

Now, let me say right upfront that I understand it’s unfair to smear Hepburn with my concern. She was just the star of “Breakfast at Tiffany’s” and probably had nothing to do with the other characters, their casting or the script. The screenplay by George Axelrod was based on a novella by Truman “In Cold Blood” Capote, and the movie was directed by Blake Edwards.

But the association for me is so strong that I can’t think of Hepburn without thinking of Holly Golightly, then Mr. Yunioshi.

Who is Mr. Yunioshi? He was the creepy, salacious and bumbling Japanese man who lived upstairs from Holly Golightly in the film. A photographer and the building’s superintendent, he was always yelling at Hepburn’s character and begging Holly Golightly to come upstairs and pose for him. “Miss-uh Go-Right-Ree!” he calls down the stairwell.

The character has magnifying-glass spectacles, squints and pronounced buck teeth. It’s almost a WWII-era caricature of a “Jap” from a poster, comic book or cartoon, come to life. Only it’s not 1942, it’s 1961.

And, the character of Mr. Yunioshi was played by Mickey Rooney, the diminutive Caucasian movie star. Maybe it’s because no Asian would agree to play the part. I can only hope.

The history of “Yellowface” — Caucasian actors playing Asian characters — had a long tradition in Hollywood, even up until the 1960s and ’70s (including the most famous instance of all, David Carradine playing the half-Chinese character in the TV series “Kung Fu” that was originally supposed to be played by Bruce Lee, who came up with the idea for the show).

Here’s a clip from “Tiffany’s” featuring one of the scenes with Mr. Yunioshi:

Here’s a good article about the history of Yellowface.

And here’s a column I wrote about https://nikkeiview.com/nv/archives03/020303.htm”>other examples of racism in our culture:

But this wasn’t just an example of letting a white actor play an Asian character. It was a broad and particularly nasty stereotype captured in a major motion picture starring a cast of big name stars. It was a statement that said loudly, that this particular stereotype is (was) an acceptable way to portray Asian Americans.

At least on the closing commentary on the Anniversary Edition of “Breakfast at Tiffany’s,” producer Richard Shepard admits, “If we could just change Mickey Rooney, I’d be thrilled with the movie!”

That’s good to know, but Rooney is there as part of the film’s legacy forever, and I still end up associating its brutal racist depiction of Japanese — of me — with it, and with Hepburn’s image. A lot of fans of the movie can dismiss or overlook the stereotyped character. Some even thought it was a high point of the movie, that it added comedic elements. (Read the Amazon.com comments.)

When I was younger, I could squirm and chuckle along with it, but I can’t stand to watch the movie anymore. And the old saw about “that’s what it was like back then” doesn’t fly with me, either. Imagine an African-American character in 1961 being satirized that way. Like I’ve already mentioned, Rooney’s portrayal was a throwback to WWII depictions of Japanese — it was over the top, even for 1961.

So, Audrey, it’s good to see you on TV commercials. Maybe I’ll Netflix your other movies for a while, so I can accept you back in my heart again.