Anti-Chinese sentiment never seems to go away, even when the US Senate apologizes for past racism 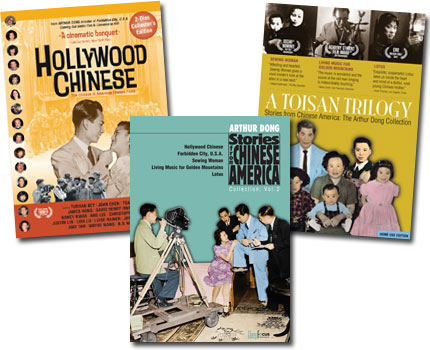 Mainstream American culture goes in cycles when it comes to anti-Chinese sentiment, and weâ€™re in one of those periods, mostly because China is ascending to its new position as one of the top world economies and that stirs up race-based xenophobia.

In the 1880s, the Chinese were accused of driving down wages by providing cheap labor and the solution was to clamp down on immigration (sound familiar?). Today, the exploding Chinese economy is combined with their undervalued currency and blamed for American job losses.

The Chinese were the first Asians to immigrate to the US in large numbers. Only a few Filipinos and a stray Japanese sailor or two preceded them, although there are historians who think Chinese settled in North America before the Europeans. But their experience is mirrored in the waves of Asian immigrant that followed: The Japanese, East Indian and Filipino. The immigrants are welcomed as manual laborers, but when they attain business success white Americans felt threatened and their rights were curtailed (or they were chased out of their mines or forced out of towns where theyâ€™d built a Chinatown district.

These cycles will continue to repeat unless we educate ourselves. There are some great sources to become more familiar with the history of Chinese immigration to the US. 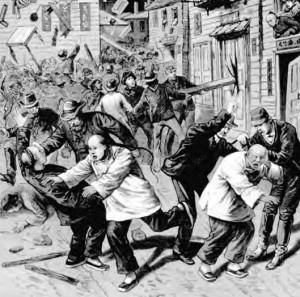 Illustration of the anti-Chinese riot in Denver's "Hop Alley" Chinese district in 1880, in which one Chinese man was lynched. A historic marker now commemorates the event in the popular entertainment district that's today known as Lower Downtown, or "LoDo."

The late Asian studies professor Ronald Takakiâ€™s â€œStrangers from a Different Shore, A History of Asian Americansâ€ is the definitive source. But I also found engrossing the history â€œDriven Out: The Forgotten War Against Chinese Americansâ€ by Jean Pfaelzer, which comprehensively covers the many attempts by towns and cities as well as states (especially California) and the US government to ban Chinese, chase out Chinese and otherwise eliminate Chinese from mainstream America.

Another great source for insight into the history of Chinese in America is the boxed set of films on DVDs (also available individually) by filmmaker Arthur Dong, who explores his Chinese American identity in sharply observed, evocative documentaries and short features.

His â€œStories from Chinese America Collection, Vol. 2â€ includes â€œHollywood Chinese,â€ a fascinating documentary that traces Chinese in the US movie industry with revealing insights from Asian actors as well as Caucasian actors like Christopher Lee and Luise Rainer, who played Chinese characters in yellowface makeup. The disc also features a bonus film from 1916, â€œThe Curse of Quon Gwon,â€ which is thought to be the first Chinese American film produced.

The second disc in the set, â€œForbidden City, U.S.A.,â€ is a loving chronicle of a famed nightclub â€“ Forbidden City was considered the Asian Cotton Club — in San Francisco throughout the 1930s to the â€˜50s.

The third disc in Dongâ€™s trilogy is â€œA Toisan Trilogy,â€ shorter films directed by Dong that include the 29-minute feature, â€œLotus,â€ about a woman in early 20th century China with bound feet and the changing role of women. Thereâ€™s also Dongâ€™s affectionate look at the elderly Chinese man who teaches him to play the traditional lute, â€œLivingMusic for Golden Mountains,â€ made in 1981 while Dong was still a film student; and â€œSewing Woman,â€ a toucbing documentary based on the experience of Dongâ€™s mother, who immigrated to the US after WWII and worked as a seamstress for decades.

Knowing the history of China and Chinese people, and understanding its relationship to the rest of the world both a century ago and today will surely break down some barriers between our countries and people.

And hopefully, learning about the Chinese will eventually help eliminate the ignorance that spills out into China-bashing every few years when Americans feel economically threatened.

(This post is also submitted to the Pacific Citizen newspaper of the JACL.)

3 Responses to Anti-Chinese sentiment never seems to go away, even when the US Senate apologizes for past racism