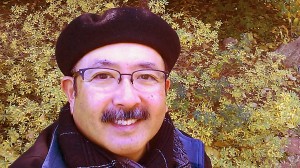 My name is Gil Asakawa. I write this stuff.

“Nikkeiview” started out as a weekly online column — well, it used to be weekly — about popular culture and politics from my Japanese American perspective. I began writing it in 1998 for a bilingual Japanese community newspaper (now long gone) in Denver, but from the start I posted the columns online. In 2006 the Nikkei View evolved into the blog you’re reading, where I can write long or short pieces, post videos, rant, rave, whatever and take advantage of the blog format and built-in archiving. You can still read my old Nikkei View columns in the column archives.

By the way, although the Nikkei is Japan’s financial index, the word “Nikkei” is also the term for people of Japanese descent outside of Japan.

“Nikkei View” has been reprinted over the years on various Web sites including Denver’s AsiaXpress.com and Hybrid Magazine. I’m a proud partner of Asian-American Village, a terrific Web site of news APA and opinions (and jobs). The column also was published in Denver’s monthly Asian Pacific American American Times and was occasionally reprinted in the “Northwest Nikkei” bilingual newspaper in Seattle. Some of the columns have also appeared in the Northern California JA community newspaper, “NikkeiWest,” and other JA community papers. I also “repurpose” blog posts sometimes as columns in the JACL‘s Pacific Citizen newspaper. I used to be the Editorial Board Chair for the Pacific Citizen, and still am a member of the Editorial Board.

These days I also cross-oist content from Nikkei View on HuffingtonPost Denver.

If any other publication out there would like to publish the “Nikkei View,” or reprint posts from the blog, please contact me!

“Nikkei View” has received recognition: The column was awarded “Site of the Month” from Japan Reference Page, a comprehensive site for links to Web sites for and about Japan. I received an “honorable mention” in the 1998 Online Writing Contest sponsored by TheWell.com for my column about Japanese names. And The Rocky Mountain News chose Nikkeiview as one of Colorado’s Top 100 Web Sites two years in a row. That, and $1.50 will buy me a cup of coffee at Peaberry’s….

As the author of Nikkei View, I’ve been interviewed by the Miami Herald for an article about the flood of Asian popular culture into the American mainstream, and I was asked to record a commentary about the opening of “Pearl Harbor” for Pacific Time, a weekly program on KQED, San Francisco’s National Public Radio station. I’ve also been interviewed foir stories about Asian American issues by the Fort Worth Star-Telegram.

In 2004, San Francisco-based Stone Bridge Press published my book, “Being Japanese American,” which is about JA culture and history, and I’ve done readings and book signings across the country, including at the Japanese American National Museum and the Japanese American Museum of San Jose. Back in the day, I co-authored “The Toy Book,” a history of Baby Boomer-era toys (Knopf, 1991); it’s out of print though copies are kicking around online, some even autographed.

Although I was born in Japan, I’m a third generation Japanese American, or Sansei — my father was born in Hawaii and my mother is from Japan. I was born in Tokyo as a military brat, and our family moved to the U.S. when I was 8 years old. I have vivid memories of Japan from my childhood, but my consciousness is American. I love the fact that I’m a product of both cultures, and with these columns, I hope to serve as a bridge to make sense of Japanese for Americans, and vice versa for Japanese.

I’ve been active in the Denver Japanese American community, as an executive board member of the Japan-America Society of Colorado and as a board member and former president of the board for the Japanese American Citizens League’s Mile High Chapter. I’m also active in the pan-Asian community, and have been an Operations Committee member of the Colorado Dragon Boat Festival since 2001.

For my day job, I’m the Manager of Student Media for the CU Independent, the student-run news website of the University of Colorado’s Journalism and Mass Communication program. I’ve worked for almost 35 years in the media, as a rock critic, reporter, editor and online pioneer. I’m also currently the Japan Expert for Answers.com, and write book reviews for Blue Ink Review.

My LinkedIn profile lists my long and winding road. You can read more about me in online biography.

I hope you enjoy the columns as well as the blog posts, which cover a lot more topics than just Asian and Asian American culture — if you haven’t read them before, please check my archives, and let me know what you think! This is always a work in progress….

— Gil
Email me at gilasakawa(at)gmail(dot)com

You can find me on a bunch of places online, including:

14 Responses to About Gil Asakawa’s Nikkeiview