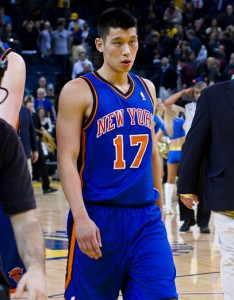 I’m about Lin-ed out — hopefully when the Knicks get back on the court after the All-Star break they’ll win some, they’ll lose some and Lin will settle into being a team leader without all the crazy hype swirling around him.

But one of the coolest side-effects of his sudden rise to fame — let’s call it the Jeremy Lin effect — has been a very public discussion of complex racial issues, the type of conversations in the media and in bars and livingrooms and offices and classrooms across the country that haven’t been uttered since… Barack Obama’s 2008 presidential campaign. Only this time, there’s the added element of racial issues involving Asians and Asian Americans.

It’s been fantastic, although at times it’s been frustrating too, because when seemingly benign slights are pointed out, the anti-P.C. police strike out and tell us to stop being so sensitive and get a sense of humor. Yes, it’s true that one reason these stupid missteps are made is because of the novelty of having an Asian American in the NBA spotlight. But seriously, would Ben & Jerry’s come out with a custom-flavored ice cream based on an ethnic stereotype for a sudden star who’s African American, or Latino? Watermelon? Taco-flavor?

I hope one message that has been made clear in the past few weeks is that it’s not OK to treat Asians with different standards.

Racism is racism. And there’s no such thing as a “good” stereotype, either — stereotypes limit people, even if they’re what would be considered commendable values such as hard-working, or smart. One sports anchor on an Asian American media email list pointed out that unconsciously or not, a majority of reports he tracked just happened to point out Lin’s “smart” basketball skills.

And Lin himself asked in an interview what it means when the media describe him as “deceptively quick” or “deceptively athletic.” He knows the unspoken part of the comments is “…for an Asian.”

So when I was asked at the last minute to give a tribute to Gordon Hirabayashi, a pioneering Japanese American civil rights leader who passed away recently, I used it as an opportunity to extend the dialogue about race and opened my tribute with Lin.

The occasion was Day of Remembrance, when Japanese Americans commemorate the Feb. 19, 1942 signing of Executive Order 9066 by President Franklin D. Roosevelt, which led to the incarceration of over 110,000 people of Japanese descent in American concentration camps during World War II.

The Mile Hi chapter of the JACL holds an annual event to mark the date, with speakers and a presentation about the history of Japanese American internment. This year’s like the last several, was held at the University of Denver’s law school.

Hirabayashi was one of four Japanese Americans who fought the order to the Supreme Court (and lost, although they were cleared decades later). He died on Jan. 2 after a long struggle with Alzheimer’s.

I knew about Gordon but not his full biography. So when I learned I had to pull together a speech in a few minutes, I pulled out my smartphone and did some quick research online and jotted down notes. While I was at it, I checked the NBA scores to see how the Knicks were doing against the Dallas Mavericks.
Continue reading →