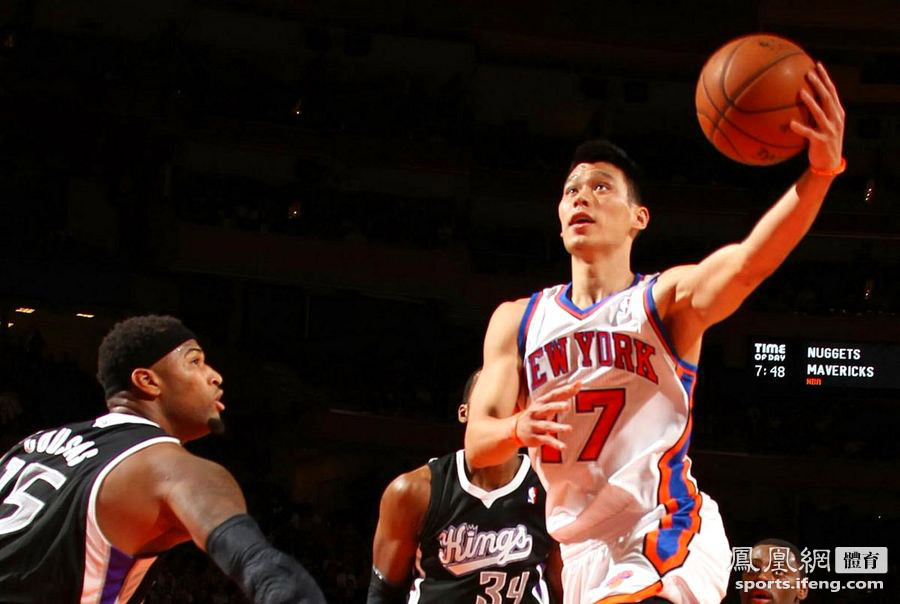 I’ve been adding updates to the bottom of my previous post on Jeremy Lin, but there’s simply too much still flying across the Internet radar, and that post is already too long. So I thought I’d comment separately about the issue of Asian American identity and our embrace of the Jeremy Lin phenomenon.

As I write this, the New York Knicks have won seven straight games since putting Lin in the game as the starting point guard. For the first six, he shot for more than 20 points per game (38 against the Lakers!). Last night against Sacramento, he had only 10 points, but that’s because he was allowed to rest and only played 26 minutes. He still racked up a career-high 13 assists, and Linsanity continues in New York. He’s goosed the spirits of basketball fans in Gotham — and around the world — and taken over headlines on the news pages.

Let’s face it, he’s a great story: The American-born son of immigrants from Taiwan who led his high school team in Palo Alto to the state title but didn’t get even a sniff of a b-ball scholarship from the Cali schools he wanted to play for. So he attended Harvard, the stereotypical jackpot destination for children of Asian parents, and got good grades and earned a degree in Econ … while playing great basketball.

Cambridge isn’t exactly known as a breeding ground for NBA stars, but the guy left a trail of tattered records and dominated the Ivy League and earned some national attention, all to no avail. No NBA franchise noticed him. So he signed with Golden State Warriors but spent an uneventful year, and was cut in December right after the end of the NBA’s lockout. He was picked up by the Houston Rockets, but let go within a couple of weeks to make room for more famous players with higher price tags. He was then signed by New York but put on the bench as the fourth-string point guard, and even sent down to the development leagues. He was put into the game out of desperation.

That was two weeks and a whole lot of Linsanity ago.

The kicker for this made-for-a-movie Linderella story (yeah, I had to use it) is that until his contract with the Knicks was signed just a few days ago, Lin slept on the couches of his brother (an NYU dental student) and a teammate, even as his fame exploded like fireworks over the NBA. I could imagine the kid taking the F-train to Madison Square Garden to play.

He got his papers signed, and moved into a White Plains condo this week. His team’s doing pretty good financially too. The Knicks’ online shop jumped 3,000% in sales for Lin’s #17 jersey, which has been the best-selling jersey in the NBA since Feb. 4, when Lin first played more than 30 minutes in a game. The jersey at one point sold out. Lin has taken over social media, with more than 2.5 million mentions him in the week after his NBA debut, more than anyone else in the NBA and more than President Obama.
Continue reading →

Really? Unfortunately, yeah. Sure, maybe the guy was just describing Yi’s nationality, like calling a player “the Russian,” But you would never call the Russian player “the Russkie” (I’m pretty sure Russkie is still a pejorative in the post-Cold war era).

If he wanted to describe the nationality of Yi Jianlian of the New Jersey Nets, a veteran of the Chinese Basketball Association and the Chinese Olympic Team, was to say that he’s …. “Chinese.” Duh.

So I’ll chalk this one to ignorance, not racism. You’d think national sportscasters would be educated enough — and yes, sensitive enough — to know better than to use an outdated racist epithet to describe a player.

What was he thinking? He wasn’t.

UPDATE Nov. 4: FanHouse.com called out the racist word, the Turner Sports Network, which ran the original broadcast and manages the NBA.com website, yanked the video from the website and said the sportscaster, Rick Kamla, “was not aware of the connotations of the word, and meant nothing malicious or offensive by it.”

A no-apology apology. I translate it as, “If you took offense, that’s your problem because I didn’t mean any offense. But I’m sorry you were offended.”

The FanHouse story also points out past instances of “Chinaman” being used, and has a slideshow of other sportscaster flubs.