Being stereotyped out of ignorance isn’t as bad as flat-out racism, but… 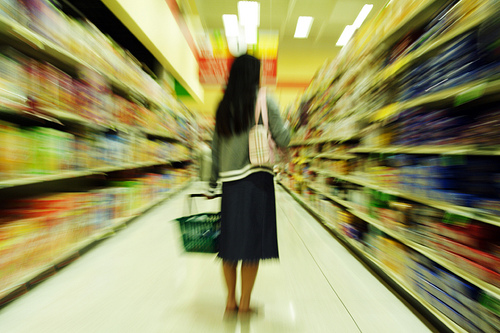 I faced an awkward racial situation a few days ago and let it pass, but then posted about it on Facebook and found it struck a nerve with a lot of my Facebook community. It resulted in a spirited conversation, and not just with Asian Americans. My takeaway is that sometimes, stereotypes and racial assumptions arise from mere ignorance, not utter racism and hate. But it can be just as irritating in 2011 to hear someone innocently treat you as a foreigner as it can to face the uglier stuff that’s still out there.

Here’s what I posted:

Even in my local supermarket, I’m reminded that “post-racial” America isn’t past its attachment to stereotypes: I went to the customer service desk at King Soopers (a Kroger chain in Colorado, store #36) and asked if they still carry the Cento brand of white clam sauce.

The clerk looked at me and immediately said, “Well, if we do it should be in the Oriental aisle.” I glared at her and said “Uh, well, I’m making linguini with clam sauce.”

It turned out they don’t carry the Cento brand while the store is undergoing a lot of construction (it’ll be the chain’s first “superstore” in the metro Denver area, with clothes, furniture — the kind of stuff you’d expect in a Super Target, or Walmart) so I went to another nearby King Soopers store and got the clam sauce.

I like our store and many of the employees so I’ll keep shopping there, but this left a sour taste in my mouth. An Oriental sour taste, I suppose.

I don’t think the woman was racist, and I don’t think there was any ill-will behind her assumptions. She looked up at me, saw I was Asian, and her brain processed a bunch of split-second information before it processed my (perfect, accent-free English) question about clam sauce. Hell, maybe she thought I said “oyster sauce” and she knows Asian cooking and really was referring me to the correct aisle… for oyster sauce.

But mostly, I think she made an assumption from my face without hearing what I said. It was a kneejerk response to send me to the aisle that would have the food of “my people.”

I gave her more information to clarify my request:

They carry the Progresso brand of white clam sauce, which is in the Italian aisle, but it has MSG in it. The Cento clam sauce is MSG-free, which is why we prefer it. But, I pointed out, all the Cento products have always been in a different aisle, next to… “The health foods,” piped up another employee who had overheard the conversation and came over to help.

“During the construction, we had to limit the number of brands we carry, so I’m afraid we took out all the Cento products. We’l have it back when the construction’s done,” the more helpful woman promised.

With that information, I paid for my other groceries (the store keeps other ingredients like canned minced clams and clam juice, in yet another aisle for some reason) and drove a few miles to another King Soopers, which stocked the Cento products.

On Facebook, my post generated a surprising amount of discussion, starting with groans and comments of sympathy.

Neda Habibi, a journalist who has obviously faced awkward race-based situations herself, noted, “That’s so disappointing, I’m sorry about that 🙁 it always catches me by surprise.”

Lisa Greim posted a link to a Boston.com commentary about an African American folk musician’s experience of “flying while black.”

Fuad Talybov wrote, “Gil, I think King Soopers is the last place I would expect people to be racially indifferent. I prefer Wholefoods, which is a whole beast on its own, but more tolerable. 🙂

And the issue isn’t about white supremists. (Note: Another friend had posted that ‘America was founded by white supremists.’) I’ve had much better experience with them rather than uneducated lower middle class that doesn’t give a crap of what race you are as long as long as you are not their race.”

I added that I’d encountered bad experiences at Whole Foods, especially in Boulder where I work, because of racial and economic class privilege: “As for Whole Foods Markets, I tend to avoid it for the opposite reason, especially in Boulder, where I work (I live in Arvada, a suburb of Denver): I find many Whole Foods are not diverse and the staff is both race- and class-privileged. I’ve walked around looking for something at Whole Foods in Boulder and been completely ignored by clerks who even made eye contact. Between the high prices and snotty attitudes, I can’t take the white privilege, esp. in Boulder.”

Granted, I’ve seen lots of clerks in Boulder who are just plain rude because they’re privileged, and they’re rude to everybody. So although Boulder is an overwhelmingly Caucasian place, it’s not bald-faced racism that rears its head.

Lisa Gifford chalked up the interchange to lack of education, and manners: “Wow – intense conversation. I’m sorry that happened. Some people just don’t think, and I’m sure no insult was intended. Just ignorance. That’s like asking a pudgy girl if she’s pregnant! :)”

Bobbie Et was disgusted, and wasn’t going to cut the clerk any slack: “Not only was this racial profiling, but the person hadn’t a clue, as to what is sold in the store or any idea of what international brands of foods are used for. Clearly, a fast food- sugar induced junkie stupor.. a sad person.. No excuse……….”

Lisa Ortiz wrote that the ignorant people are thankfully the minority: “Oriental is a rug, not a people (or food). Someone didn’t get the memo. Ignorance is universal, unfortunately. My daughter is Chinese and I get rude comments all the time. Fortunately, it is balanced by the majority of people who think before they open their mouths.”

Alisa Sanada added to the conversation: “Not just the US but traveling around I realize Asians still have a lot of work to do but one thing I don’t know is what to do when bad things happen? Like in the States business seem to respond to these kinds of race issues? Or not I dunno but there at least seems to be a culture already established in the States where it makes it easier to complain and someone will listen. Like while I’m traveling and something happens, I try to complain to the company the person that’s in question is affiliated to but sometimes it is not worth it since discussions of racisms seem to be at a different level that people would just not understand what I’m complaining about. And like on the streets or whatever, if people shout racial slurs the only thing i can do is shout back so that’s also frustrating.

This response goes way beyond what you talked about but I just had a really annoying incident in Peru and just felt like it was a good time to ramble.”

And Emiko Hanano recounted an incident that shows that ignorance isn’t the domain of any one race: “I asked a sales clerk at Nordstrom’s, ‘Where is the Hermes Un Jardin apres la Mousson‘? It was a new scent. I have a pretty good French accent for a Buddhahead. She looked at me and said, ‘I don’t speak Korean.’ I said, ‘What? I’m not speaking Korean I’m speaking French!’ The sales clerk was some kind of Asian, obviously not Korean. The male salesclerk standing next to her was embarrassed.”

Leah Williams, who’s married to my cousin-in-law Eric Sasaki, also pointed out that she knows how it feels when she’s the only Caucasian in an LA Japanese supermarket: “As a chunky white girl I do get some strange looks when I shop Marukai but sheese, that is really bad.”

Eugenia Beh had the perfect last word on the thread: “â€Ž[facepalm] Sigh.”

(Note to copyright trolls: The photo at the top of this post is from iStockphoto, and yeah, I paid for it….)

14 Responses to Being stereotyped out of ignorance isn’t as bad as flat-out racism, but…