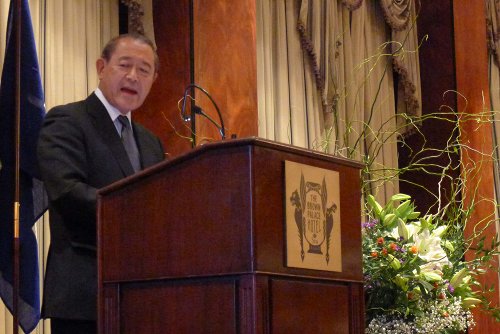 But the luncheon never felt like a dry political summit.

Partly, that warmth is due to the longstanding relationship between both the states and the countries, and especially the strong cultural exchanges and business bridges that cross the Pacific. But this year, the emotional bonds are even stronger, because of the outpouring of support from America for Japan in the months since the March 11 earthquake and tsunami that devastated the Tohoku region of northeast Japan. Every Japanese speaker including the Ambassador noted the Japanâ€™s appreciation for the support. Yamagata prefecture lies within the Tohoku region, and is bordered on the south by Fukushima prefecture, where the stricken nuclear power plant is located, so the donations and well-wishes of Americans is especially poignant for people in Coloradoâ€™s sister state.

The Japan America Society since the spring has raised more than $100,000 and delivered the entire amount directly to aid agencies working on the ground in the Tohoku region. During his keynote address, Ambassador Fujisaki gave an update of the recovery and rebuilding efforts in Tohoku, distributing a printout of remarkable before-and after photographs showing areas devastated after the tsunami, and how they look just a few months later.

Noting his role as a top representative of Japan in the worldâ€™s powerful nation, Fujisaki — whoâ€™s clearly a statistics wonk — shared an analysis he created, comparing Japan and the U.S. in areas such as population and population density, obesity rates (U.S. ranks first in the world for women and second for men; Japan is 32nd and 33rd), education, social indices (womenâ€™s status is 18th in the U.S. and 57th in Japan; U.S. is first in number of immigrants while Japan ranks 22nd, Japan ranks 8th lowest in homicide rates while the U.S. is 101st) and economic factors. It was an enlightening look at Japanâ€™s place in the world.

Notably, Fujisaki also focused on a subject of increasing interest in Japan: Japanese Americans. The Ambassador was very familiar with the history of Japanese in America, including the internment years during World War II. He commented on Colorado governor Ralph Carr, who welcomed Japanese Americans to the state and ruined his political career for it, and mentioned that he had read form 9News reporter Adam Schragerâ€™s excellent biography of Carr, â€œThe Principled Politican.â€

In a brief post-luncheon interview, Fujisaki said he finds the role and history of Japanese American â€œinterestingâ€ and applauded the fact that JAs have succeeded in spite of the racially-motivated setbacks that faced the community.

The one notable absence from the luncheon, the late journalist and diplomat Bill Hosokawa, was named often enough that it was as if he was there. Several speakers, including JASC president Dick Clark and Morgan Smith, who was Director of the Colorado International Trade Office when he opened the doors to Yamagata 25 years ago, cited Hosokawa as the gentle but insistent behind-the-scenes driving force behind the warm relationship that the state enjoys today with Yamagata, and with Japan in general.

Itâ€™s a fitting tribute to Hosokawaâ€™s vision that the Colorado Yamagata Sister State relationship thrives a quarter-century later, and that efforts are underway to memorialize Hosokawa with a bust at the Denver Public Library and the Denver Botanic Gardens, and the Botanic Gardens is undertaking an expansion that will rename its popular Japanese gardens as the Bill Hosokawa Bonsai Pavilion and Japanese Garden.

Itâ€™s because of pioneering leaders such as Hosokawa in Colorado that Ambassador Fujisaki is impressed by the spirit of Japanese in America.

The Ambassador and the delegation from Japan were able to tour the Denver Botanic Gardens, and also to attend the more casual annual picnic of the Japanese Association of Colorado the day after the Yamagata luncheon.

The visiting dignitaries got a great introduction to Colorado hospitality; theyâ€™ll probably remember this trip long after theyâ€™re back home.