But Consul General Ono and his staff do much more than just hold a birthday party every December. During the past year he’s interacted with the community in lots of other ways. Partly, that’s because of the aftermath of the March 11, 2011 earthquake and tsunami that devastated northeast Japan. Ono arrived in Colorado in the wake of a number of fundraising efforts for disaster relief, including events and donation drives by the Japanese community.

I was just speaking to a graduate student working on the JA community’s response to the temblor and tsunami. Although many Japanese Americans don’t feel a strong connection to Japan outside of some family traditions, familiarity with Japanese food and the habit of taking off shoes in their homes, the March 11 disaster reconnected all Japanese Americans to the country of their roots.

They may not have reached out to contact distant relatives (most Japanese Americans’ family origins were in southern Japan’s prefectures anyway, so they weren’t affected by the tragedy), but the disaster may have nudged their connection to the country out of sympathy and empathy. 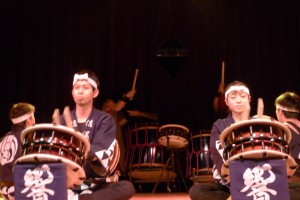 The Kyogaku taiko drum group from Matsukawa, performed in Denver as part of a “thank you” tour to America, during a reception marking the first anniversary of the Tohoku earthquake and tsunami of March 11, 2011.

The outpouring of emotion and support for Japan was so genuine, that the Consul General thanked the community during a memorial reception in March of this year, during which the Consulate featured the Kyogaku taiko drum group from Matsukawa.

This reception was a special occasion that would otherwise not have happened. But Ono and his staff (and his charming wife, Eiko) have been busy marking other anniversaries and building bridges with the Japanese American community all year. 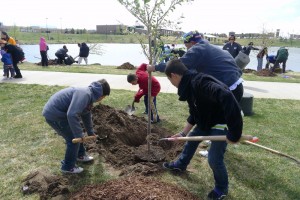 Volunteers and invited officials spent a few hours planting cherry blossom trees in a chill spring weather to mark the 100th year of the gift of cherry trees from Japan to the US.

Because this was the 100th anniversary of the gift of cherry blossom trees from Japan to the United States, the Consulate held a series of plantings of cherry blossom seedlings throughout Colorado. At many of these events the Consulate features Japanese cultural performances such as koto, or flower arranging displays, by Denver-area artisans.

Ono and his staff have also brought Japanese artists to the area to perform free concerts, including Abeya Tsugaru Shamisen Ensemble, which features members who are national champions of the stringed instrument in Japan. 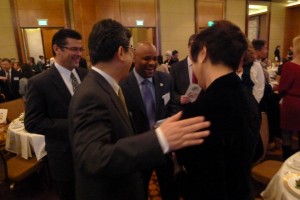 Denver Mayor Michael B. Hancock relaxes with Consul General Ono and his charming wife Eiko before a Japan America Society of Colorado banquet.

Ono and staff members are also regular attendees at local Asian and Japanese community events, such as the recent Japan America Society of Colorado annual banquet, which focused on the upcoming direct United flight from Denver to Tokyo on the 787 Dreamliner.

Many of these events are well-attended by local Japanese and Japanese Americans.

Previous Consul Generals have also brought Japanese culture to Denver, though not as often. But Ono has added a new layer of outreach into the community, by aggressively awarding commendations from his office, and also facilitating recognition of local JAs by the Japanese government, including not just Coloradans but also recipients from Utah, which the consulate also covers.

Earlier this year, Ono awarded the Order of the Rising Sun, Gold Rays with Neck Ribbon to Dr. William I. Higuchi for his work in educational and research exchanges with Japan, and his role as special adviser to the Heart Mountain Wyoming Foundation, to keep alive the memory of the concentration camp there.

Ono then awarded the Commendation of the Consul General of Japan to two Denverites and a Denver organization for their contribution to mutual understanding and closer ties between Japan and the US: Seiji Tanaka, a longtime leader of Japanese Association of Colorado; Haruhisa Yamamoto, former owner of Denver Tofu Company; and Ikebana International Chapter 66, one of 69 branches of Ikebana International in the United States, which promotes “friendship through flowers” with its artful flower arrangements.

In July, the Consulate awarded the Foreign Affairs Ministry’s Foreign Minister’s Commendations for promoting mutual understanding between Japan and the US. In this region, the recipients included attorney Richard Clark, a founder of the Japan America Society of Colorado (and a behind-the-scenes power who helped bring United’s direct flight from Denver to Tokyo, which launches next March); Denver County Court Judge Kerry Hada; and Mr. Raymond Uno, president of Japanese Community Preservation Committee of Salt Lake City.

In November, Kimiko Side, a longtime leader of the Japanese community who was instrumental in the Denver-Takayama Sister Cities relationship, as well as in many organizations including JACL and JASC, received the Order of the Rising Sun, Gold and Silver Rays, an imperial decoration and the highest civilian honor conferred by the country. Side was flown to Japan to receive the award from Emperor Akihito.

And finally, Haruhisa Yamamoto, the man who received the Consul General’s commendation for running Denver Tofu for many years long before tofu caught the fancy of mainstream America, was just flown to Japan to receive the Minister of Agriculture’s Award for Overseas Promotion of Japanese Food.

All these award recipients were welcomed on stage at the Emperor’s Birthday reception to toast “campai!” to the crowd, with Consul General Ono once again congratulating them. 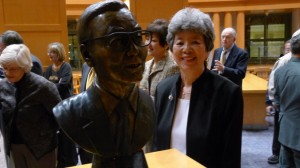 On top of the recognition for so many individuals, Denver was buzzing with Japan-related news and events all year, including a major Japan-related exhibit at the Denver Botanic Gardens; a Japanese Gardens conference; a visit of representatives from Miyagi Prefecture, one of the hard-hit areas from the earthquake and tsunami, to thank Denverites; and the opening and dedication of the Botanic Garden’s Bill Hosokawa Bonsai Pavilion and Tea Garden and the installation of a bust of Hosokawa, a JA community leader and longtime journalist, at both the Botanic Gardens and the Denver Public Library.

And of course, the direct flight from Denver International Airport to Tokyo’s Narita Airport on United’s brand-new 787 Dreamliner jet was announced last spring, and will start service March 31, 2013. It should bring a whole new level of activity highlighting Denver’s Japanese and Japanese Americans.

There’s a lot for the community in Colorado to be proud of from this past year. We may be a much smaller population than on the West Coast, but we’re making an impact here – and we’re building ever-stronger bridges between Denver and Japan.

Note: An earlier version of this post was written for the JACL’s Pacific Citizen newspaper for their year-end Holiday Issue.