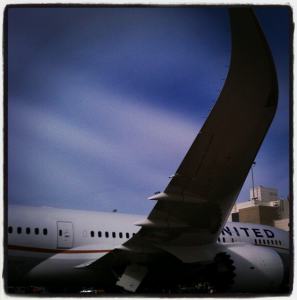 Or it has been, until now. Earlier this year, the City of Denver and United Airlines announced a new direct route on United from Denver International Airport to Tokyo’s Narita Airport, flying Boeing’s new 787 Dreamliner, the “limousine of the skies.” The inaugural flight departs DIA on March 31, 2013 and the first direct flight from Japan will arrive the next day, April 1. Expect a lot of hoopla and fanfare both those days — it’ll be a big deal.

It’s not just because we finally have a direct flight between Colorado and Japan. It’s a gateway from Colorado to the rest of Asia, for people (and businesses) in the midwest, Texas and the plains states.

I’ve been asked to join a committee to help promote the direct flight. The group includes folks from the Mayor’s office, the Governor’s office, tourism and convention folks for both the city and state, as well as DIA and United staff.

I look forward to helping with outreach to both businesses and to tourists; to Japanophiles and to Japanese Americans who’ve held off traveling to the country of their heritage, and to Coloradans as well as Texans, Kansans, Missourians, Nebraskans… you get the idea.

For all of us in the middle of the United States, United 123 will be the flight of choice to Japan (yes, that’s the flight number — cool, eh?).

The first non-stop trans-Pacific flight was made in 1931, in a small prop plane that made a crash landing near Wenatchee, Washington 41 hours after it took off from Tokyo. In the 1960s, when my family moved from Tokyo to the States, the flight time had been shaved down to 18 hours. More recently, I recall flights from the West Coast to Narita Airport north of Tokyo took under 15 hours, but that was after the two-hour flight from Denver to LAX or SFO.

The new direct flight gets you there in just over 12 hours and back to Colorado in just over 10 hours — a significant time savings. Travelers will leave at 11:55 am mountain time and arrive at 3 pm the next day (with the 16-hour time difference) in Tokyo.

Time is money, but having a direct flight isn’t the only reason to fly the Dreamliner. 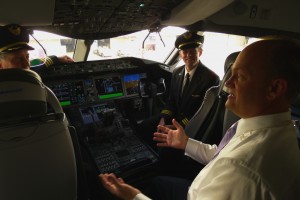 9News reporter Gregg Moss has a talk with the Dreamliner’s pilots during the media preview of the plane that will fly United passengers direct from Denver to Tokyo starting March 31.

One of the other reasons to take UA Flight 123 is not just that it’s direct from Denver to Tokyo, but because of the aircraft, Boeing 787 Dreamliner itself. The jet is currently running into some turbulence in some media reports because of some mechanical issues, but that’s not unusual for a brand-new aircraft going through its initial commercial paces. By the time UA 123 takes off from DIA the planes should be in tip-top shape.

The plane is made of a composite material in one cylindrical piece that reduces both weight and drag. It flies more efficiently, and faster, and takes advantage of a new aerodynamic design that curls up its wings at the tips. It’s propelled by one huge engine on each wing manufactured by GE and Rolls Royce.

The 787 has a bunch of passenger-focused design improvements from earlier jetliners, from cleaner cabin air to larger windows (that have cool electronic dimming glass with no pulldown shades); more space (even in Economy); cabin air that’s pressurized to a lower altitude than other planes so passengers feel better and more energized. There are even subtle, smart design elements like overhead bins that are lower and easier to open and close, yet don’t block headroom like most planes. 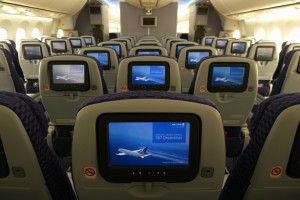 Roomy, even in Economy

I know this stuff not just because I read the website, but because I managed to talk my way onto a media preview last week of the plane, which was parked all day at DIA for various invited groups to ogle and tour.

The electronically dimming windows and overhead bins are indeed cool, as promised. The bathroom in the rear of the cabin scared me when I poked my head in (larger than other airline bathrooms) and then shut the door. It flushed when the door was shut. I looked around to see if anyone had heard, because I didn’t want them to think I’d used the bathroom. I’m crass, but not that crass. 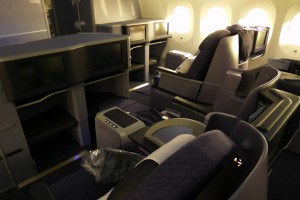 First class is where you can definitely stretch out in utter comfort.

There’s definitely more leg room in Economy than on the flight I took to Japan just last year. But if I ever grow up and get to fly in First Class, wow — that’s luxury. Each seat is like a self-contained cubicle that’s perfect for work and resting. Those seats would rival some Tokyo apartments for space and comfort.

There’s a bit of a premium for flying this prime new plane on a direct flight to Japan. If you search online, it currently costs around $1600 for Economy class heading there and $2,000 coming back, but that’s not much more than United trips with a connecting flight on the West Coast.

The reason why I’m helping to promote this flight is that for it to continue, United has to see passengers fill the seats — especially the business passengers who’ll pay the premium to fly first class. But I think the plane will be a boon to all types of passengers, and urge anyone who’s thought about traveling to Japan to do it through Denver International Airport, on the Dreamliner.

United 123 is the flight that will bring to life all of our dreams of an easy trip across the Pacific.