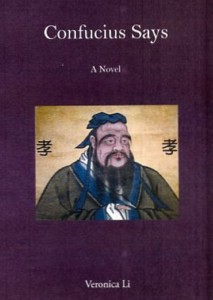 “It was a very important part of this equation,” she says. “I wanted to have my parents have their say. This was for a selfish reason: Today I’m the caregiver. Tomorrow, I will be the care receiver. So I decided to make this a novel. (Now I’m) telling the story from the omniscient viewpoint of the narrator. I can get into each person’s head and tell each of their point of view.” 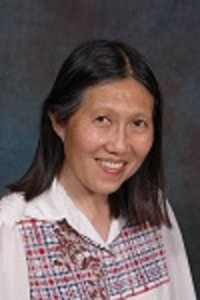 Even the dog is real, but given a fictional doggy makeover. “My dog was Snoopy, a real Snoopy with all the characteristics of Snoopy,” she says but she changed it because readers’ familiarity with Peanuts character might distract from her story.

When Li first took in her parents, they seemed close to dying. “That’s why I took them in,” she explains. “But the fact is once they were well taken care of, they bounced back up and they lived for 10 years.” In the course of the fictionalized story of her parents’ time with her they descend into dementia, and spend time in the ER. Finally they are institutionalized.

Dealing with her parents’ crises was a challenge for Li. “We are known to be good to parents. An American friend said ‘Oh, you’re so Chinese,’ but they have no idea that we have the same difficulties as everybody else, the same fights and same ups and downs. It’s as difficult for us as it is for anyone.”

The constant thread throughout the book is Cary’s (Li’s) relationship with her parents and how Asian family values run deep in their cultural DNA. Any Asian American and many non-Asians will be familiar with the tools of the parent-child give-and-take: Shame, guilt, fear, obligation, comparison to siblings, nostalgia and oh yes, love even though it may not be expressed in the hugs-and-kisses way that non-Asian Americans kids are raised.

Along the way, we read about the parents’ past, and the drama of their lives. “I heard these stories (about her mother’s life) as family anecdotes, but when I sat down to write about them I realized they were full of turmoil. They never fought in front of the children,” Li explains. 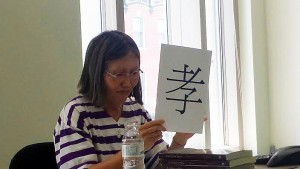 Veronica Li visited AARP headquarters in Washington D.C. on July 30 for a reading and booksigning.

“I thought people could learn from this story,” she adds. “In general, caregiving is a problem for everyone. But I think the burden is heavier for people of Asian heritage because of our cultural traditions. I agonized over it. This agonizing is not necessary if you understand about filial piety.”

The key, Li says, is also the lesson that the character Cary learns by the end of the book. “It’s not about making your parents happy at your own expense. It’s about making yourself happy too. And it’s also about serving your community and your country.
“It’s something much bigger, a moral code to good living in society. Because there’s so much guilt that comes with filial piety and because of everything they did for us, we cannot do enough for our parents. But that agony on my part was totally unnecessary.”

“It really is good for your soul – you just have to do it wisely, and take care of yourself while you do it. The universal thing is that we can never repay our parents exactly what they gave us.”

You can order “Confucius Says” from Amazon.com or VeronicaLi.com

This post was originally written for AARP and published on AARP’s AAPI Community Facebook page. If you want to see more profiles similar to this, be sure to “LIKE” the AARP AAPI Facebook page!