I just got back from a week in Washington, D.C. attending the Asian American Journalists Association’s annual convention. I sat in on a lot of interesting (and some not-so-interesting) sessions about social media and journalism, issues in the Asian American Pacific Islander (AAPI) community, and lots of other current topics in the news.

But one topic was barely mentioned as part of the panel discussions: The death of 18-year-old Michael Brown, an unarmed African American man who was shot by a local police officer in the small town of Ferguson Missouri, a suburb of St. Louis.

He was killed on August 9, and for the next week – during the AAJA convention – the tension in Ferguson between protesters and law enforcement has been front and center in the news.
Continue reading →

The V3 Asian American Digital Media Conference is coming up on Aug. 25, with a great Opening reception and Awards Ceremony on Friday, Aug. 24. Here’s Joz Wang, AAJA-LA president and one of V3con’s organizers, talking about the event:

Jane Lui will be performing at the Opening Reception and Awards Ceremony for V3con.

We’re deep in the planning process for V3, the Asian American Digital Media Conference, scheduled for Aug. 25 at the Japanese American National Museum in Los Angeles with an Opening Night Reception and Awards ceremony on Friday, Aug. 24 at the Pacific Asia Museum in Pasadena. Most of the panelists are set and confirmed. We’re lining up performers like Jane Lui (shown here) to take the stage at the Opening Night soiree.

If you’re Asian American, a blogger, a social media maven, a journalist or just a fan of artists like Lui or David Choi or Clara C, or a reader of bloggers like Phil Yu of Angry Asian Man, Jen Wang of Disgrasian or Jeff Yang of the Wall Street Journal, you won’t want to miss this ultra-cool event.

They’ll all be there. Or V there. So don’t be square.

And, the low Early Bird price is only available through tomorrow, so register today and you can feel good about being oh-so-Asian frugal. If you’re a slacker Asian (like me), the pre-registration price ain’t so bad, only $10 more. If you’re traveling from outside SoCal, we’ve arranged for pretty good rates at the Miyako Hotel in Little Tokyo, just half a block from JANM and across the street from a row of ramen shops. Yowsa!
Continue reading → 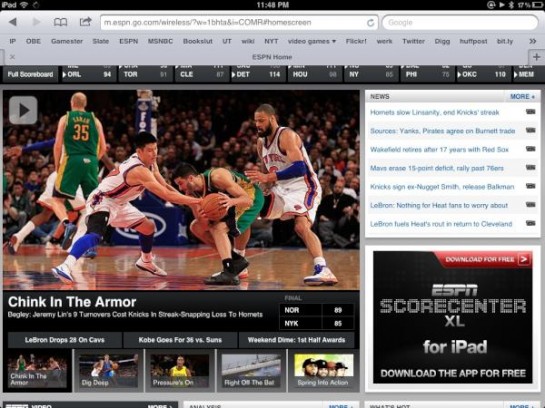 Sigh. I knew it couldn’t last. Not only did the Knicks finally lose one, but ESPN managed to end its love affair with Lin with a helluva Dear Jeremy kissoff. ESPN last night posted a game story on some mobile editions with the headline “Chink In The Armor” (really) at 2:30 am ET, which was changed after 3 am to “All Good Things…”

ESPN posted an apology this morning, by Kevin Ota, Director of Communications, Digital Media ESPN Communications, who ironically is Asian American and having a crappy weekend:

Last night, ESPN.comâ€™s mobile web site posted an offensive headline referencing Jeremy Lin at 2:30 am ET. The headline was removed at 3:05 am ET. We are conducting a complete review of our cross-platform editorial procedures and are determining appropriate disciplinary action to ensure this does not happen again. We regret and apologize for this mistake.

The network’s Rob King also tweeted a response that linked to the apology:

There’s no defense for the indefensible. All we can offer are our apologies, sincere though incalculably inadequate.

I don’t think this is over yet. There’s no way any producer — even the most inexperienced, underpaid, ignorant, young overnight employee — could not know about the racist meaning of the word “chink.” The headline, placed beneath an image of Lin, was a deliberate use of a racial — and racist — epithet. I hope some serious actions are taken by the network to both punish the person who used the word in this context, and to prevent it from happening again.

Unfortunately, this wasn’t the first time the word “chink” was used on ESPN … to describe Jeremy Lin. Here’s an ESPN anchor (no, it’s not Walt Frazier; ignore the title beneath him) saying “chink in the armor” in a reference to how Lin can improve his game:

(ESPN posted this 11-second video apology today, three days after the incident and only after the use of the word in the headline provoked outrage across the Internet.)
Continue reading →

Advice for Mid-Career Journalists from Yuki Kokubo on Vimeo.

Journalist Yuki Kokubo interviewed a sampling of speakers (including me) at the recent Detroit convention of Asian American Journalists Association, and though she didn’t have a pre-planned script when she began taking to people, the consistent theme that emerged from the speakers themselves was advice for mid-career journalists.

This video is from the same interview session, edited by Patrick Lee of the New York AAJA chapter. These comments focus on giving advice to journalism students.