I’m an off-and-on supporter of National Public Radio, I admit it. I’m a fair-weather donor to NPR, depending on how much I’m tuning in. There have been periods when I commute with the car when I listen to NPR a lot, and then there are times when I ride the bus to work and I pass the time with my iPod set to shuffle.

Lately, I’ve been driving to work more, thanks to a parking space in the building that’s too inviting not to take advantage. So, I’ve been listening to “Morning Edition” and “All Things Considered” more again.

During the run-up to the election, I was a complete news junkie, and also tuned in at the office, streaming my local NPR station, KCFR‘s news programming all day via the Web.

So when the most recent pledge drive came around in October, I was easily enticed to give more support than I ever have. Instead of the minimum of $50 that I’d usually donate, I committed $120 on my credit card just so I could get the premium they offered for that level of support: A Radio Bookmark.

The Radio Bookmark allows me to save stories on NPR to hear them again later. It lets me leave the car instead of sitting in the driveway or a parking lot (or, in some cases, on the shoulder of the road), riveted to my seat and listening until the end of a fascinating report.
Continue reading →

Check out the widget above. Whatâ€™s a widget?

Widgets are cool, portable little online features that you can put onto websites easily by just copying a little bit of code into your page. I’m helping to get the word out about The Denver Post‘s widget for coverage of the Democratic National Convention, coming up in a little over a week here in Denver.

Itâ€™s a simple way for sites to include syndicated content from outside sources, contained within a defined box or space. Think of all the different elements on a MyYahoo or iGoogle home page â€“ those individual boxes of content are all widgets on the page.
Continue reading →

Leave it to a former rockcrit — and a McClatchy employee (the company just cut 10% of its workforce nationally) — to come up with an eloquent essay on the decline of the newspaper industry and the ascension of the Internet.

Online people, myself included, have been saying for years that the Web should be first in news priority, and that journalists shouldn’t think that they work for newsPAPER companies, but instead NEWS companies. Maybe, coming from an august writer like Leonard Pitts, a world-class columnist at the Miami Herald, this idea will start to sink in with those of you who still have ink in your veins.

He sounds like speeches and conversations I heard going on a decade ago, but better late than never, I say:

So maybe we should regard the Internet not as an extra thing we do, but as the core thing we do. 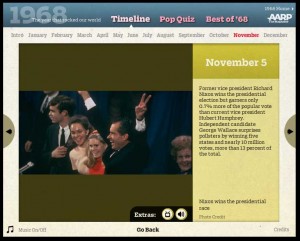