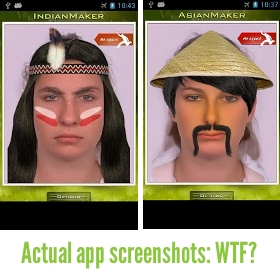 UPDATE, JAN. 17: It took longer than I thought, but Google finally removed the app from its Play Store. Now, back to your regularly scheduled blog post…

Phil Yu got pissed off about this on his Angry Asian Man blog back in November, but CNN just noticed the story is still simmering on the interwebs. So I downloaded it for posterity, to use as an example in lectures about racist stereotypes.

“Make Me Asian” (and the related “Make Me Indian,” both shown at left) is an Android mobile app that you can download for free from the Google Play app store.

(NOTE: Updates posted at bottom, including more parodies as they’re posted and more crazy stuff from Pete Hoekstra as he says them).

This ad was shown during the Super Bowl, but only in Michigan, where former Republican Congressman Pete Hoekstra is running to unseat Democratic Senator Debbie Stabenow. The 30-second spot shows a pretty young Asian woman in what looks like Vietnam, riding a bicycle among rice paddies with a conical hat slung over her back, who stops and says to the camera, “Thank you Michigan senator Debbie Spend It Now,” for contributing to U.S. deficit spending and borrowing more and more money from China.

Yes, the ad shows Southeast Asia (a familiar sight to anyone with even a modicum of familiarity with world history of the past 40 years, and certainly Hoekstra) but it bashes China as a way to get at Stabenow. The woman in the ad never says “China” but it’s clear who the target is, as the woman speaks in her sort-of-broken English, after a gong (that’s not a cliche at all) starts off the spot:

“Debbie spent so much american money, you borrow more and more from us. Your economy get very weak. Ours get very good. We take your jobs. Thank you debbie spend it now.”

The ad is so chockfull of racially-charged symbolism it’s disgusting as well as unintentionally comical (some Chinese are puzzled because they can see immediately the setting isn’t China).

It’s messed up and offensive on multiple levels, and not just because Hoekstra’s campaign chose to mash together westerner’s scant knowledge of Asia into one image: “Oh, relax, it’s all Oriental, right?” It plays on stereotypes of the “Hot Asian Babe,” Asians’ broken English, sense of superiority over outdated notions of third-world rice farming economies, and fear of China/Japan/Koreans/Viet Cong/the Asian flavor-of-the-year.

I’m starting to dread Hallowe’en. It seems like every year, there’s some new offensive costume that makes racist fun of Asians or perpetuates a racial stereotype. I wrote about this back in 2002, when a really sick costume called “Kung Fool” was sold.

Today I read AngryAsianMan.com and saw that mainstream America once again thinks it’s cool to manufacture a caricature of Asians into a mass-market costume: One that’s even available on Amazon.com. The Fee Ling Yu mask is disgusting — the mask itself is bad enough, but there are variations being sold and shown online that include a different cap and thick round glasses.

I grew up with this image of myself and others like me. It’s incredible and sad and horrifying… downright scary… that I still have to see this now, decades later.

Some of the annual parade of costumes simply perpetuate a stereotype, like geisha costumes and wigs that are standard fare. Continue reading →

I realize that when I point out how something as seemingly benign as the “won ton” font bugs me, readers might think I’m being petty and overly sensitive. But I hope those readers will respect my opinion if something does piss me off. Plus, I hope everyone can understand why certain things are just plain offensive to Asian Americans, not as a result of over-sensitivity but simply because they’re racist stereotypes.

One of them is the “ching-chong’ accent that comes out of the http://www.funvidapps.com/Site/LuckyFortune.html“>Lucky Fortune iPhone app, which Apple has approved for its iPhone App Store while they turn down other apps.

Both Jennifer 8 Lee’s Fortune Cookie Chronicles blog and Gawker have pointed out that this app is racially offensive. The Gawker post includes a video of the app in action.

It’s a cute idea at first: You break open a fortune cookie, and hear one of a series of pre-recorded fortunes.

The problem is the voice that reads the fortune is a fake Chinese accent — the kind I’ve heard all my childhood and even as an adult, when a racist taunts me. “Go back where you came from, Jap/Chink/Nip/Gook,” go the echoes in my head today.Asian Americans call it a “ching-chong” sound, a phony rendition of what a white person think is the sound of Chinese. Continue reading →

Sigh. First Miley Cyrus, now a Jonas Brother — coincidentally, another Disney music and movie star — pulls his eyes back in a stereotypical slant for a photo.

Some people might wonder what the big deal is. It’s just a funny face (Cyrus, for one denied that it was mocking Asians at all).

All I know is, I grew up with (white) kids making the same face to me: leering, making buck-teeth smiles, pulling their eyes back and saying “Ah-so!” and laughing crazily like they’d just done something really clever.

It made me sick to my stomach as a kid who felt disempowered, and seeing famous (white) people doing it now brings all the bile right back up again.
Continue reading →