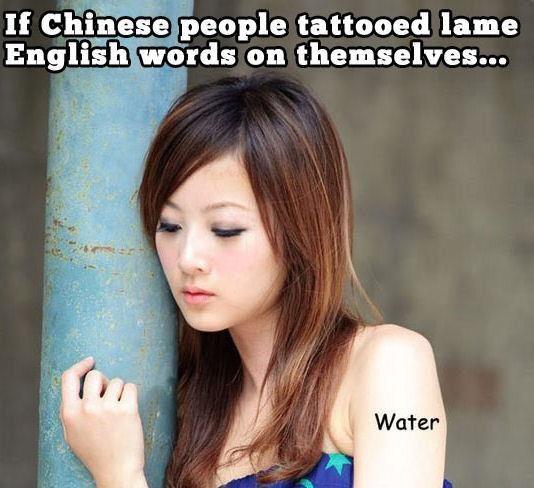 Oh my…. ‘Nuff said. Tip of the hat to George Takei, who shared this piece of brilliance on his Facebook page. The photo now has over 200,000 Likes… in one day.

When white people have asked me (sorry, they’ve all been white people, no Asians, Latinos or Africans) what their tattoo means, I’ve half-jokingly told them “It means ‘I’m a dumbshit.'” or something to that effect. No one I know would ask me that, because they would know that I DON’T READ KANJI.

It’s like when non-Japanese people come up to me and introduce themselves by saying something in Japanese. I know only a little conversational Japanese….

Any Japanese person could tell at a glance that I’m Japanese American, not Japanese, and would not assume I could speak the language.

UPDATE: A reader, Linguarum, posted a link in the comments below to a site that actually goes to the trouble of translating Kanji tattoos off photos that people have submitted. The site is Hanzi Smatter and it’s a hoot.

Think of it as a racial mashup. We’re living in an era when the President of the United States is multiracial, and we’re changing our perspectives on ethnic identity — especially what it means to be Asian American. We’re moving beyond single cultural identification. Many of us are connected to our ethnic heritage and add the layer of American culture. Hence, I’m both Japanese American and Asian American.

In addition, the richness of mixed-race America is going to continue to have a huge impact on the U.S. in the future.

For example, the Asian American community of the future will be a multicultural tapestry with a bright thread of mixed-race Asians. In the Japanese American population, the mixed-race fabric is already very evident — since the 1970s, JAs have married outside our own community more than any other group. So we’ve been familiar with the term “hapa” for decades.

I remember when I was a kid, my mom used to call mixed-race JAs “ai noko,” which literally translates as “love child,” or maybe “hafu” (“half”), and she would say it disparagingly (sadly, she’s not PC at all). Likewise, “hapa” is a Hawai’ian term that means “partial” — and it was used originally in a derogatory way, for “hapa haole,” or “half-white.” Although I know people who are offended by the use of the word hapa, it’s become a common term for mixed-race people of all ethnicities, not just Asians. I’ve heard it used within the black and Hispanic communities.

Because of the importance of the mixed-race AAPI community, Erin and I are proud to announce our next interview for visualizAsian.com: Kip Fulbeck, an artist, author, performer, slam poet and….uh, professor! Kipâ€™s ethnic background is Cantonese, English, Irish, and Welsh, and he’s nationally known for his exploration of mixed-race identity.

Our conversation with Kip Fulbeck will be on Tuesday, July 21 at 6 pm PT (9 pm ET). Continue reading →