PSY, the Korean pop sensation whose viral hit video, “Gangnam Style,” has been viewed alomst 800 million times on YouTube (that’s the official video, never mind the countless other users’ uploads and all the spoofs and tributes), closed out the American Music Awards on Nov. 18. In a savvy, surprising and ultimately, ironic, collaboration, the 35-year-old PSY (real name: Park Jae-sang) was joined for a mashup of his hit with MC Hammer’s “2 Legit 2 Quit” (above) and brought the house down, with celebs and fans (Hammer too) mimicking his horsey-cowboy dance moves.

Within minutes, blowback flew out over Twitter. Most of the messages were gut reactions to the irony of a song sung mostly in Korean being featured on the “American” Music Awards. Here’s one example: “Seriously psy is closing the show?? It’s called the AMERICAN music awards not the Korean..” and “I’m pretty sure this is called the American Music Awards #gobacktoAsia.” (Okay, the “gobacktoAsia” hashtag is pretty offensive — I’ve had that yelled at me in the past.)

The fact that the tweeters didn’t catch the awesomeness of the irony and only expressed their xenophobia and ignorance was disappointing but not surprising.

Some of the tweets, though, were flatout racist, like “Why is chink PSY at the American music awards he doesn’t make American music what is going on” and “are you kidding this chink is on the AMA’s? #sad #keywordAMERICAN.” You can see a sampling of offensive tweets at the Public Shaming Tumblr blog.
Continue reading → 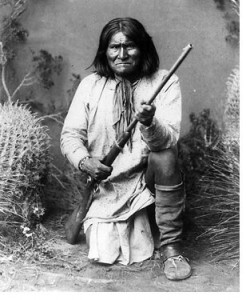 And the impact of the U.S. military’s use of “Geronimo” — either as the codename for Osama bib Laden, or the codename of the mission that took bin Laden out — is definitely negative in the Native American community.
Continue reading →

Erica Johnson is a woman on a mission. Earlier this year, she launched a blog called Hapa Voice where she posts submissions from hapas — mixed-race Asians — with photos and short autobiographies that explain a little about themselves. The titles of each post are a simple rundown of the submitter’s ethnic mix.

This elegant, straightforward approach to stating one’s own identity is both powerful and moving, especially for hapas because their identities have been a central focus all their lives, even more so than other people of color. Being mixed adds a layer of richness for themselves, and too often a lare of confusion for others. So it’s really cool to read entry after entry on “Hapa Voices” and see so many people who are finding their voice… and their identity.

Johnson has been inspired by the work of hapa writer, filmmaker, artist, activist, standup comic and lifeguard (really) Kip Fulbeck.

His “Hapa Project” and books such as “Part Asian, 100% Hapa” are clear antecedents for “Hapa Voice.” In the book, Fulbeck traveled the country shooting portraits of mixed-race Asians accompanied by statements of identity by the people posing. He recently published a new book of adorable portraits of little hapa kids, “Mixed.”

But as an ongoing website project, “Hapa Voice” takes Fulbeck’s inspiration and breathes it more life. Johnson explains the origins of the “Hapa Voice” blog on its “About” page:

I’ve written before about Japanese anime, or animation, as well as the genre’s characters and their large eyes, and wondered if they symbolize a desire to look more Caucasian.

But this brief guest post by Julian Abagond on the blog Sociological Images titled Why Do the Japanese Draw Themselves As White? that offers very interesting food for thought.

Abagond makes the case that Americans (white people) think Japanese draw anime and manga characters to look Caucasian, but that’s a Western construct, and that “Americans” (he conflates nationality with ethnicity, a common slip in race/culture conversations, even by well-intentioned people and often by Asians) see everything in terms of white unless there are stereotypical symbols that identify a character as another ethnicity.